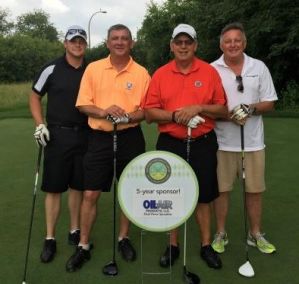 Oil-Air Products has been a long-time sponsor of the Struthers Parkinson’s Center’s most important fundraiser, the SPC Golf Challenge. The company is coming through again this year, but with heavy hearts -- the Challenge will be missing one of its biggest supporters. Former Oil-Air Products CEO Roger Schwerin, who lived with Parkinson’s for many years, passed away shortly after retiring in January.

“While his Parkinson’s diagnosis was very difficult for him, Roger found support, understanding, and a great group of people at the Struthers Parkinson’s Center,” said Kyle Britton, President of Oil-Air Products. “Both of us enjoy golf, so the SPC Golf Challenge was a perfect opportunity for us and the company to support a cause that hit so close to home. Through Roger’s efforts, we have increased our level of participation every year and are pleased to be part of the event’s growth."

"Roger was a close friend and colleague of mine for 25 years, so his passing makes this year’s SPC Golf Challenge incredibly special to Roger’s family, friends and Oil-Air Products. We will be there in full force to celebrate Roger’s life and support the organization that meant so much to him.” In addition to supporting the golf event, Roger and his family established the Schwerin Family Endowment Fund, which supports Struthers Parkinson’s Center programs and research initiatives. Park Nicollet Foundation is extremely grateful for Roger and the Schwerin family’s support – as are the thousands of Parkinson’s patients he and Oil-Air Products have helped.